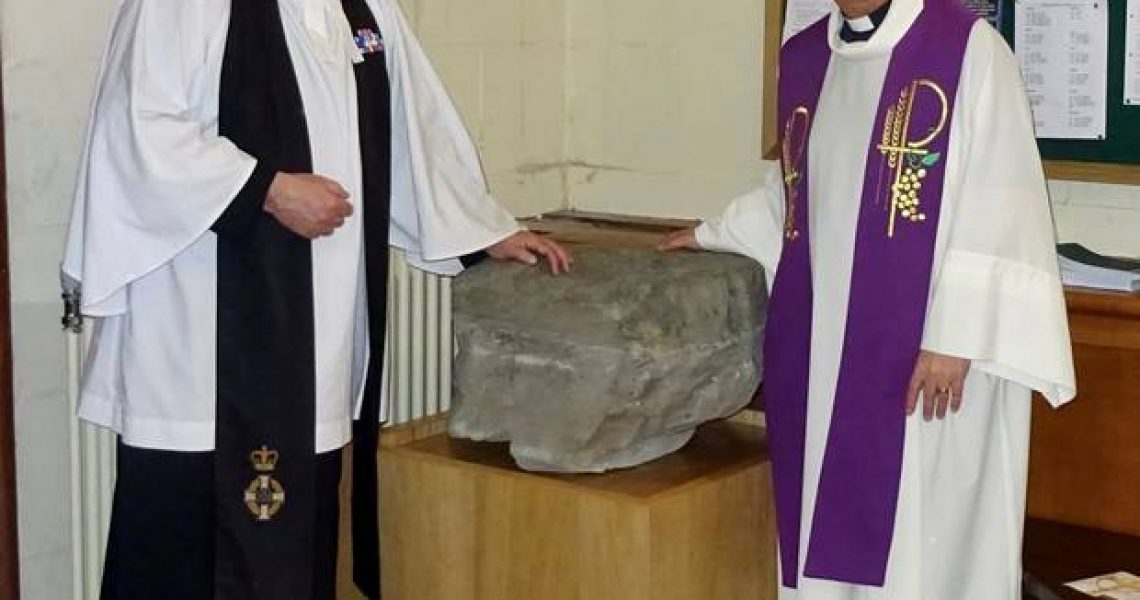 An ancient religious stone closely linked with Saint Patrick and earlier has been presented to Down Cathedral by the Army which has had it in safekeeping for a number of years.

The granite stone – known as a Bullaun – has a history going back over 1000 years as a focus in early Christian pilgrimages to one of Saint Patrick’s earliest landing sites in Ireland and through its chequered history has served as a font and a birdbath.

Bullauns are stones with a small hollow and in Celtic times were attributed power and mysticism with collected rainwater believed to hold healing powers. They continued into Christian times with some being used to hold Holy Water and others holding “prayer stones”.

This one is believed to have been housed in a small church which was constructed to mark one of St Patrick’s “landing sites” near the mouth of Dundrum Bay and close to a spot known as St Patrick’s Well.

Records going back through the 12th century reference a small church at Killyglinnie where it is now accepted widely as at the spot where Saint Patrick landed on subsequent missions to Ireland – Slaney River near Saul holding firm as the site of his first return after fleeing slavery on Slemish Mountain.

With the small church – noted even in the times of John de Courcy – falling into decline over the years and eventually much of the stonework being used for local building work the historic Ballaun, which was central to pilgrimages, disappeared.

After being “discovered” being used as a bird bath in a Downpatrick garden it was placed in the safekeeping of St Martin of the Mournes – the garrison church at Ballykinler, and used as a baptismal font.

Following the transfer of 2 Rifles from Abercorn Barracks at Ballykinler to Thiepval Barracks in Lisburn and the closure of St Martin of the Mournes the “Ballykinler Bullaun” now has a new home at Down Cathedral within yards of the accorded burial site of Saint Patrick.

Cathedral Dean, Very Revd Henry Hull, said the gift from the Army is not only welcome but poignant, coming in time for the annual pilgrimage from Saul to the Cathedral.

He said: “It is wonderful to link together all of these stones and pieces of history and I think for 21st Century pilgrims, they love to be able to come and see and touch the things that resonate with the past.”