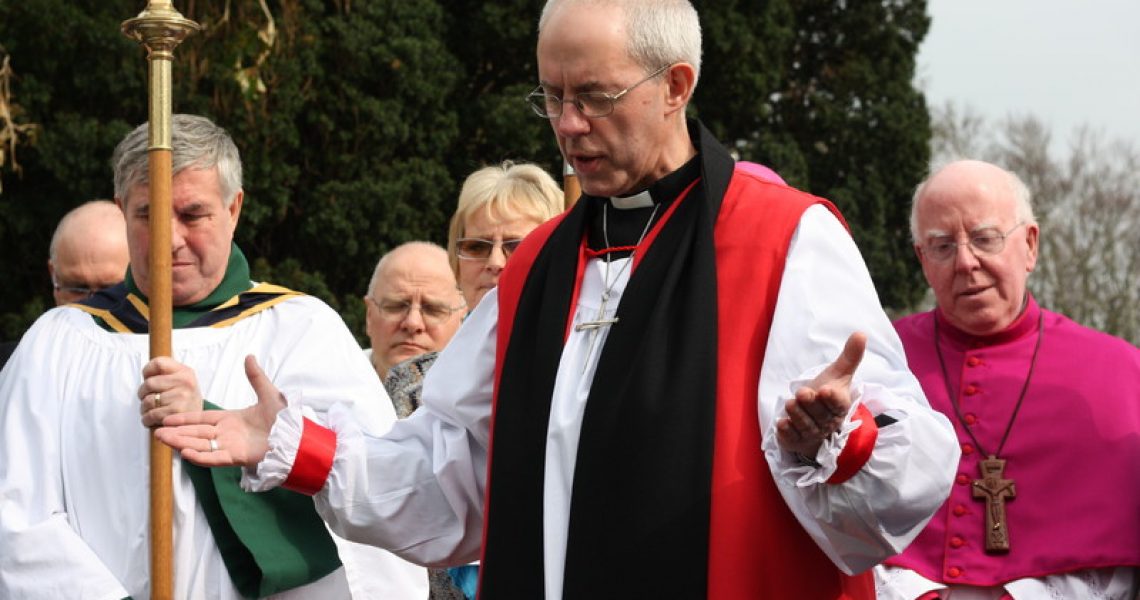 Historic visit by the Archbishop of Canterbury

The diocese was privileged to host the Archbishop of Canterbury on an historic St Patrick’s Day visit to Saul and Downpatrick.

The Most Revd Justin Welby came at the invitation of the Bishop Harold Miller and joined the Down and Dromore annual St Patrick’s Day celebrations where he spoke powerfully on the theme of reconciliation, one of his key priorities in ministry.

Bishop Harold said, “What a joy it was to welcome Justin Welby to the St Patrick’s Day celebrations. He is an amazing man of God, who engages so easily with people of all kinds. The presence of the Spirit in our celebrations was palpable, and it was deeply moving to have so many parts of our community represented.”

It is the first time in over 50 years that a serving Archbishop of Canterbury has made the pilgrimage from Saul to Down Cathedral and preached at the Festival Service. The Archbishop of Armagh, The Most Revd Richard Clarke, also made the two mile pilgrimage after a service of Holy Communion at Saul Church.

The day began on an informal note with a quick cup of coffee in the hall at Saul. A small team of parishioners provides refreshments every year and they were delighted that Archbishop Welby took the time to say hello. He was impressed by Saul which was very still on a gradually warming spring morning, describing it as a ‘thin place’ and ‘a place that invites you to pray’.

At the church the congregation had already spilled outside in larger numbers than usual. Archbishop Welby presided and Dom Mark–Ephrem of Holy Cross Monastery in Rostrevor gave the address in which he spoke of the paradox of powerlessness at the heart of the gospel. You can download Dom Mark’s sermon in full here.

The 2 mile pilgrimage to Downpatrick is traditionally punctuated by prayer which this year focused on reconciliation and was led by Bishop Harold. It was probably our largest pilgrimage and as usual we were joined by people from a variety of Christian backgrounds, nationalities and races, including the group visiting from our link diocese of Albany.

The final stop was outside Downpatrick Methodist Church when the Archbishop Welby and World Methodist Vice President, Gillian Kingston launched ‘Into All The World: Being and Becoming Apostolic Churches’. The report, written by members of the Anglican–Methodist International Commission on Unity and Mission and of which Bishop Harold Miller was Anglican Co–Chair, highlights how Methodists and Anglicans have understood mission. It surveys places around the world where there is already active cooperation, and goes on to provide Tool Kits with practical advice for ways to work together.

The pilgrims were piped into Down Cathedral where Sullivan Traditional Music Group had created a wonderful atmosphere in the narthex. Church leaders from the main Christian traditions and pilgrims from across the world attended the Festival Service as well as MP Margaret Ritchie, Speaker of the Northern Ireland Assembly Mitchel McLaughlin, and Justice Minister and Alliance party leader David Ford. It included contributions from the cathedral choir, the McCartney School of Irish Dance and the Down and Dromore Year of Mission choir, Kerygma, who sang 2 pieces on their debut. Those unable to get a seat in the Cathedral were able to see and hear the service in the adjacent overflow tent.

Archbishop Welby’s sermon text was in Ephesians 2. Drawing on recent events and contemporary concerns such as human trafficking of which St Patrick himself was a victim, he said that ‘the best choice any person or society can make is to be a disciple of Jesus Christ’. He went on to say that those who are reconciled to God ‘light up the world by the radicality of the Gospel … so that gripped with Jesus the Church speaks of peace and reconciliation”. He continued, saying that, “the world needs the witness of those who have made the journey from enemy to friend, who are no longer strangers and aliens, who are being built together into an altogether different community in the household of God. And if there is any community who knows this, not simply in heads but in hearts, it is here in Northern Ireland.

“There remain huge challenges,” he continued, “because reconciliation is a fragile flower that always finds itself in the cold climate of the human heart, and can only be nurtured by the warmth of love, of fellowship, of mutuality, of the Spirit of God from whom it comes.

“Despite those challenges you have embarked with enormous courage on the long road to reconciliation and you are the symbol of hope for so many around the world. Don’t give up. Make it work. It is a gift of God to you for the world. It is held in your hands as a treasure. It is something that comes from the peace of God.”

Finally, the Archbishop called for Christian people to proclaim peace politically – “full of energy to change our world”, changing it “not by power but by vulnerability and love” – and to be “at peace with God, at peace with each other and at peace with the world,” continuing “to call for peace till the Lord returns, as Patrick did”.

Following the service, Archbishop Welby, accompanied by an ecumenical gathering of clergy, as well as civic and political representatives, laid a wreath on the grave of St Patrick in the grounds of the cathedral before joining with 800 people for the traditional Irish stew and apple pie lunch.