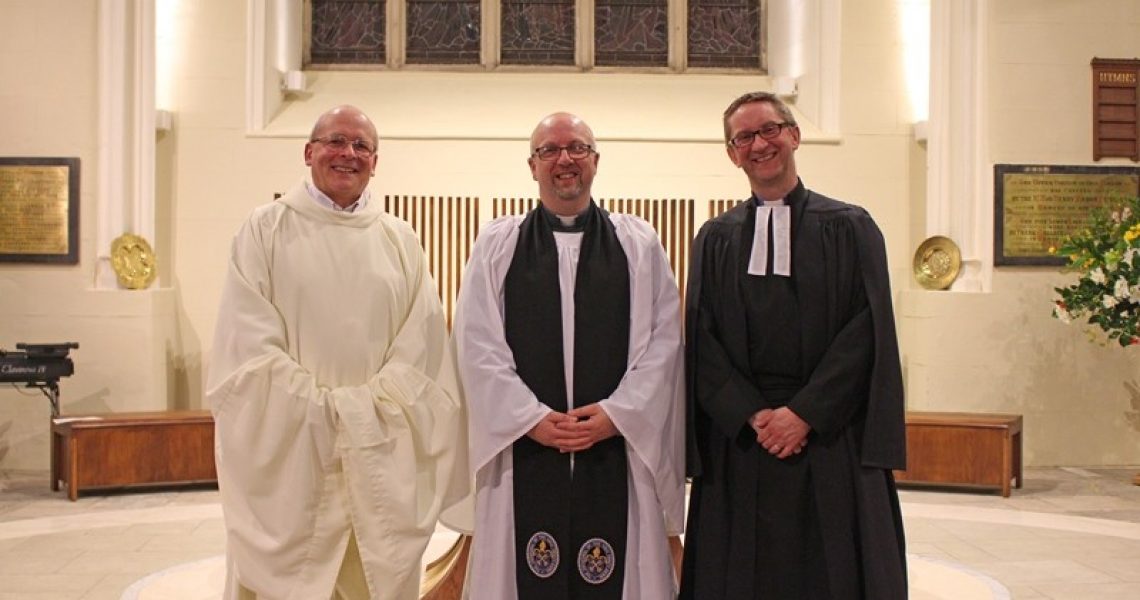 A Service of Thanksgiving was held on Thursday 23 April in Down Cathedral to mark the reordering and redecoration of the Cathedral and to install 3 new canons, including the cathedral’s first ever ecumenical canons.

Mark has been Rector of St Mary’s Ballybeen since 2005 and is the Clerical Honorary Secretary for Down Diocese. He grew up in a clergy family, his late father Maurice having served in Connor, Down & Dromore and Armagh Dioceses.

Mark was educated at Sullivan Upper School, Down High School and Lurgan College before training as a Primary School Teacher at Stranmillis and teaching in Bangor for three years.

Since ordination in 1993, he has served in St. Columba’s, Portadown as Curate Assistant, Monaghan Group of Parishes as Rector and also on the staff of CMS Ireland based in Belfast. Mark is married to Joanne and they have one daughter Lydia aged 11.

John is also from a clergy family. His father is now a retired Methodist minister and his elder sisters are also ordained ministers in the Methodist Church.

He was educated Methodist College Belfast and then studied Modern History at Queen’s, before entering Edgehill College.

Since ordination John has served in Tandragee and Richhill; as minister of Movilla Abbey and Comber; and from 2009 to 2014 he was the Methodist Chaplain to QUB. Last year John was appointed as Director of Ministry for the Methodist Church, based at Edgehill College. Since 2009 he also has been the Director of Arrow Ireland.

John is married to Ruth, a physiotherapist who works for the NHS, and they have two children, Hannah and Daniel who are 10 and 8.

Fr Eric was born in Le Havre in 1949, and after university studies in Rouen and Paris, he entered the Benedictine Abbey of Bec in Normandy in 1975.

In 1983, he was sent with Father Mark–Ephrem to Northern Ireland to establish a dependent cella of the Abbey of Bec. Their mission was to be a sign of compassion with the suffering Church in Northern Ireland: a place of prayer for reconciliation, peace and unity. They settled first at Ballykilbeg, in the shadow of Down Cathedral.

In 1987, they were called back to Bec where Eric became Claustral Prior.

In 1997, five monks were sent back to Northern Ireland with the same perspective as in 1983. This time they were asked to found an independent monastery with a mission of spiritual ecumenism. In January 1998, they pitched their tent in Rostrevor and in 2004 moved into the brand new monastery in Kilbroney Valley.

Fr Eric says that after 32 years of prayer for reconciliation, peace and unity in Northern Ireland, it is a joy and an honour to come back to Down Cathedral